Basic Information
Site Name
IT06-Pianosa Island
Short name
IT06-001-T
Country
Italy
Subsite Name(s)
Isola di Pianosa - Italy
Site Manager
Dr. Francesco Primo Vaccari
Site Description
Pianosa Island (Long. 10° 04' 44” E and Lat. 42° 35' 07” N) is the fifth, by extension, of the seven islands of the Tuscan Archipelago National Park with a total area of 10.2 km2 and a coastal perimeter of approximately 20 km. The island is almost completely flat, with some small undulations. The highest elevation is 29 m above sea level (a.s.l.), while the average is about 18 m a.s.l. The climate of Pianosa is influenced by its flat morphology that prevents the condensation of moist air, resulting in a mean annual rainfall considerably lower than on the other islands of the Tuscan Archipelago; furthermore, due to the high permeability of the soils, the rain is quickly drained. On the basis of an historical meteorological dataset (1951-2009), mean air temperature is 15.8 °C and mean annual rainfall is 497 mm, ranging between a minimum of 176 mm (1999) and a maximum of 716.2 mm (1984). A clear seasonal precipitation pattern shows a maximum from October to December followed by a decrease with a minimum value in July. The first historical record of Pianosa island dates back to the Roman age, when the Emperor Ottaviano, in the 6-7 A.C., forced the grandson Agrippa Postumo to live on Pianosa island. Following the decadence of the Roman Empire, during the periods of Barbarians’ invasions, the island was abandoned. The name of Pianosa island newly appeared in some documents of the Repubbliche Marinare of Pisa and Genova (XII and XIII century) that reported the remarkable strategic position of the island. The 27th August 1802, Napoleone Bonaparte established that the islands of Elba, Capraia, Pianosa, Palmaiola and Montecristo were united to the territory of the French Republic. Bonaparte visited Pianosa twice and found it the most interesting of the other islands, appreciating its richness of vegetation and animals. In 1858 Pianosa became an Agriculture Penal Colony, where the prisoners were forced to work in the fields. During the ’70s the jail of Pianosa became a maximum security penitentiary. Only in the ’80s, representatives of the Government and members of the civil society started to propose to close the prison and to return Pianosa to the competent civil authority. In view of this, the number of the prisoners was drastically reduced and, consequently, several agriculture activities progressively stopped. In the 1997 the territory of Pianosa was formally included in the National Park of the Tuscan Archipelago and since than it is a site for natural conservation. In 1998 the penitentiary was completely dismissed
Last modified
2021-11-23 12:11:47 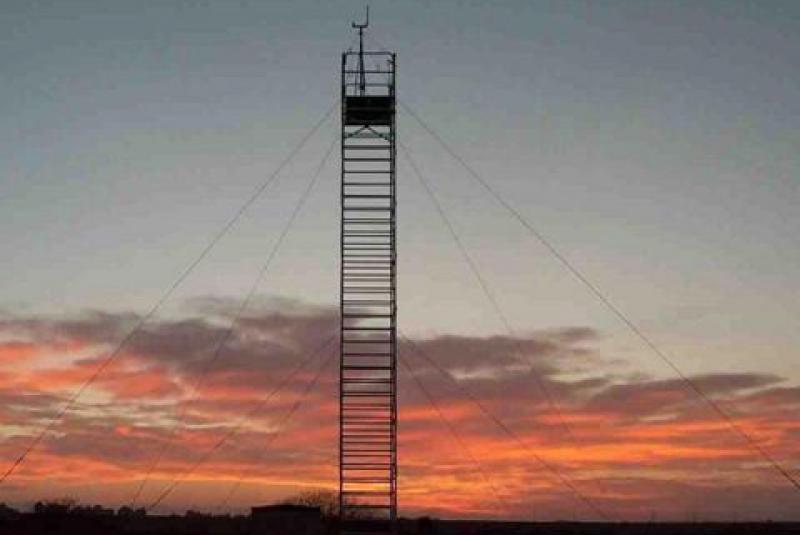 Centroid coordinates [.shp] [.kml]
Site Details
Ecosystem and Environmental Characteristics
GEO-BON Biome
Terrestrial
Biome
Agricultural
Ecosystem Type
Agricultural
EUNIS habitat
Coastal habitats (B)
Marine habitats (A)
Air Temperature: Average Annual
15.80°C
Precipitation Annual
497.00mm
Geology
Pianosa Island is formed almost entirely on organogenetic limestone and Pliocene sandstone that overlie, at a depth of about 30 m, a complex of marly sediments dating back to Miocene. Quaternary eolian deposits, thick about 2 m and constituted of cemented yellow sand, marginally on the East Coast are present. Above the Pliocene formation, there are Pleistocene deposits of different composition, such as whiten calcareous sandstone rich of gastropods and bivalves and red and yellow gravelly, sandy and silt materials come from the mainland.
Vegetation
The original vegetation of Pianosa island was presumably represented by a Mediterranean macchia, dominated by a mixture of sclerophyllous and deciduous trees, bushes and grassland This vegetation must have been strongly affected by the Penal Colony agriculture activities and today survives mainly along the coastal perimeter. In fact, it is only in the coastal perimeter that it is possible to identify the association Crithmo-Limonietea characterised by the presence of endemic species like, Limonium planesiae. The Mediterranean woodland found on the island is typical of calcareous soil dominated by the presence of Rosmarinus officinalis, Cistus spp. and Juniperus phoenicia (Baldini, 2000). Patches of this plant community exist at different evolution stages as a consequence of the progressive renaturalization process that the island is currently undergoing. Additionally small planted woods, characterised by the presence of Pinus halepensis, Quercus ilex and Arbutus unedo, are well represented, also few Eucalyptus trees planted along the edges of road paths, were encountered. The highest fraction of the island?s surface is represented by abandoned pasture and cultivated fields now covered by a species association typical of degraded Mediterranean agriculture soil dominated by: Bromus fasciculatus, Daucus carota, Lagurus ovatus, Asphodelus ramosus, Avena barbata, Dactylis glomerata, Plantago lanceolata, Rostraria cristata, Asparagus acutifolius, Petrorhagia saxifraga and Scabiosa maritima. A complete floristic analysis of the Pianosa island is reported by Baldini (2000) who identify more than 500 plant species. Based on previuous research activities three main ecosystems were characterised on Pianosa Island: 1. Abandoned pasture land 2. Abandoned cultivated fields 3. Macchia Degraded arboreal areas, occurring on fields previously cultivated for oil and wine production, are characterised by the presence of Olea europea and Vitis vinifera.
Soils
The soils of the island, developed with the contribution of marine and continental sediments (Bossio et al., 2000), are thin and mainly classifiable as Leptosols according to the World Reference Base for Soil Resources (ISSS-ISRIC-FAO, 1998). Cambisols with a well pedogenised subsurface horizon are found at higher depths (around 50 cm). In any case, the soils are alkaline, rich of carbonates, loamy sand or sand and with a moderate content of rock fragments. The content of organic carbon is variable, strictly dependent on types of vegetation and management.
Hydrology
The climate of Pianosa is influenced by its flat morphology that prevents the condensation of moist air, resulting in a mean annual rainfall considerably lower than on the other islands of the Tuscan Archipelago; furthermore, due to the high permeability of the soils, the rain is quickly drained.
Protection Level and Land Use
Protection Level (IUCN category)
Category IV – Habitat/Species Management Area
Type, Design and Scale
Site Type
Stationary land-based site
Design of Experimentation
mainly experimentation
Scale of Experimentation
catchment scale
Design of Observation
mainly observation
Scale of Observation
entire catchment
Equipment
Permanent Power Supply
No
Equipment
Data infrastructure » Data services » Other data services
Operation
Accessible All Year
Yes
All parts of Site Accessible
Yes
Access Type
boat
Permanent Operation
No
Site Visit Interval
180
Maintenance Interval
180
Data Management
General Data Policy
Co-authorship on publications resulting from use of the dataset
Network related information
LTER Site Classification
Master
Additional data
There is EURO-CORDEX climate scenario data available for this site: