Basic Information
Site Name
Hardangervidda National Park
Short name
Hardangervidda
Country
Norway
Web Address
http://ecopotential-project.eu/2016-05-24-14-52-12/protected-areas/26-the-harda…
Site Manager
Ole Vetaas
Tessa Bargmann
Keywords
biodiversity
ecopotential
ecosystem ecology
ecosystem services
Protected sites
Site Description
The National Park was established in 1981, and about half of the land is private and the rest is governmental. Hardangervidda is the largest mountain plateau in Europe, and the inner core of Hardangervidda is the largest National Park in Scandinavia (excluding Svalbard). The park is 3422 km2 large, and spans three counties (Hordaland, Buskerud and Telemark) and eight municipalities. The protection regime is National Park (IUCN Category II) and it also includes some Landscape Protected Areas (IUCN Category V), see map. Cultural heritage: Several hundred nomadic Stone Age settlements have been found in the area, most likely related to the migration of the reindeer. Ancient trails cross the plateau, linking western and eastern Norway. Land use: The natural resources on the plateau are of great value to the surrounding villages, and this National Park has allowed a rather high level of land use and associated buildings. The consequence of this type of management is that there is quite a lot of motorized traffic associated with the harvesting of resources and maintenance of buildings, in addition to the operation of tourist cabins. Large flocks of sheep are grazing and browsing every year. There is also regulated fishing and hunting. In addition, Hardangervidda National Park is used as a recreation area and as a source of extra food for urban citizens. •Hardangervidda National Park Centre at Skinnarbu in Tinn - is opening as a visiting centre with a new exhibition in 2013. •Hardangervidda Nature Centre Eidfjord - visitor centre for Norwegian nature, climate and environment. Open April to October. On Skinnarbu you also find the Southern Norwegian Wild Reindeer Centre, a centre working with conservation and sustainable management of the wild reindeer and the wild reindeer areas in Norway.
Last modified
2019-12-05 09:12:33
General Characteristics, Purpose, History
Site Status
existing
Year Established
1981
Purpose
The main purpose of establishing Hardangervidda National Park was threefold: (i) Protect a section of a very valuable high mountain plateau where the natural landscape is home to unique artic flora and fauna, and several species have their southern limit in this area. (ii) Protect the cultural heritage and the cultural environment, and allow for sustainable land use such as farming, grazing by livestock and fishing. (iii) Protect and provide an environment for sustainable outdoor life and natural experiences, such as fishing, hunting, education and environmental research.
Research Topics
conservation
ecology
biodiversity
Parameters
ecosystem parameter
landscape parameter
Photos 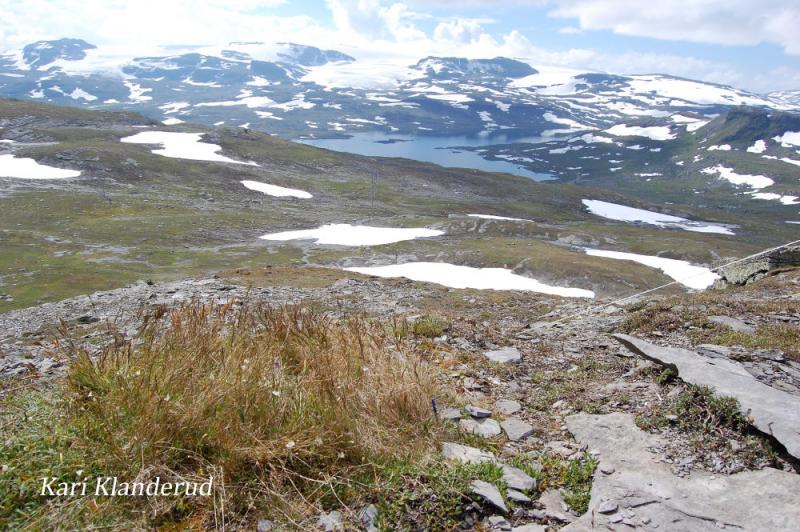 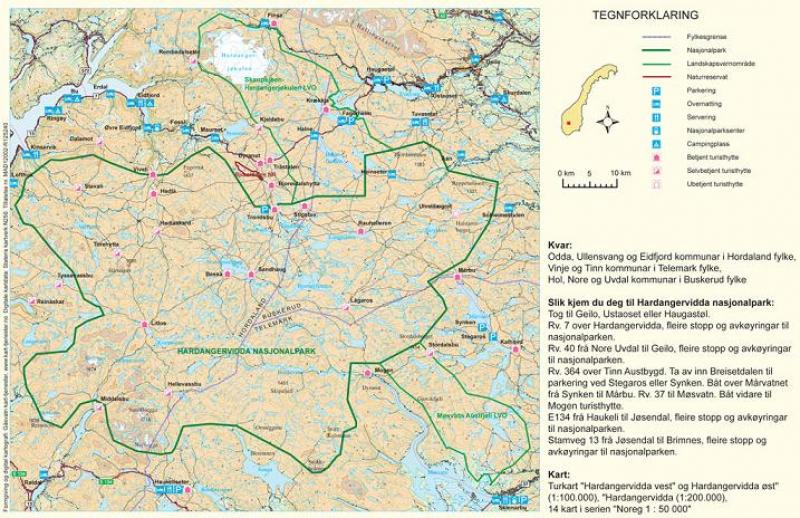 Centroid coordinates [.shp] [.kml]
Bounding Box [.shp] [.kml]
Boundaries [.shp] [.kml]
Site Details
Ecosystem and Environmental Characteristics
GEO-BON Biome
Terrestrial
Biome
Alpine
Ecosystem and Land Use
Alpine
Biogeographical Region
Alpine Bio-geographical Region
Geology
The plateau is the largest ?peneplain? (eroded plain) in Europe, covering an area of about 6,500 km2 with a mean elevation of 1100 m. The bedrocks at Hardangervidda originate from Precambrian and Cambro-Silurian periods. The plateau with its boulders and rock outcrops are the remnants of mountains that were worn down by the glaciers during the quaternary Ice Ages.

The landscape of the Hardangervidda is characterised by barren, treeless, and shrubby moorland interrupted by numerous lakes, streams and rivers. The climate is Northern Boreal to Alpine (Dfc/ET), but during the warm part of the Holocene (9000 ? 5000 years ago), large parts of Hardangervidda were wooded; pine logs can still be found preserved in bogs well above today's treeline. The current projected warming may enable forest to recolonize the area if the grazing pressure is reduced.
Vegetation
Fauna

A primary intention with Hardangervidda National Park was to secure living areas for the stock of wild reindeer ? which is the largest in Europe. On Hardangervidda, wild reindeer are still able to follow their seasonal migration routes relatively unimpeded by obstacles such as roads and snow scooter- tracks. During the winter they are able to graze on lichens not covered by snow, due to strong winds with prevailing direction. The breeding grounds are on the western side of the plateau.
Hardangervidda is also regarded as the southernmost limit for other arctic animals, such as the Arctic Fox and the Snowy Owl, and is well known for its vital populations of Beaver, Elk, and Mountain Trout in the many lakes created during glacial periods. The extensive plateau with its many lakes is also a vital habitat for numerous bird species, such as Grouse, Willow Grouse, Golden Eagle, Snowy Owl, cranes and falcons.

The alpine climate enables many arctic plants to survive at this rather southern latitude (60 03? 07.19??). Within the boarder of the National Park many arctic plants species have their southernmost limit. The mountain flora is dominated by widespread dwarf shrubs and willows, but wherever the bedrock has some schist (not eroded by the glaciers), which is rich in calcium and magnesium, the alpine flora is very rich in species. This is mostly in the western part where rainfall is high due to the western winds from the Atlantic Ocean.