Basic Information
Site Name
Škocjan Caves
Short name
ŠC
Country
Slovenia
Web Address
LTER Slovenia
Site Manager
Mitja Prelovšek
Site Description
The Škocjan Caves (Škocjanske jame) are a unique natural phenomenon, the creation of the Reka River. The Reka River springs from below the Snežnik plateau and flows some fifty-five kilometres on the surface. After reaching the Karst, that is the limestone surface, the river not only deepens its riverbed through erosion, but also by means of corrosion – it dissolves the limestone. The Reka River blind valley is the largest in Slovenia. In the distant past, probably in the Early Pleistocene, that is a few hundred thousand years ago, the ceiling of the cave collapsed some 200 metres from the sinks; as a result, the collapse dolines Velika dolina (up to 165 metres deep) and Mala dolina (120 metres) were created, separated by a natural bridge, a remnant of the original cave ceiling. Above the caves, between the wall above the sink and the walls of Mala dolina, lies the village of Škocjan. Close to the houses, there is another entrance to the underground, a ninety-metre-deep abyss called Okroglica, which ends just above the underground Reka River. At the bottom of Velika dolina, the Reka River finally disappears underground and resurfaces again thirty-four kilometres away at the springs of the Timava River, not far from the Adriatic coast. Škocjan Caves and karst above them in the area of the Škocjan Caves Park, are on the edge of the Classical Kras (Karst). They are in the close contact with imperable flysch and permeable limestone, in ​​the so-called contact karst. Caves are composed of several parts: the greater part is flooded, but upstream are also dry caves. Due to their exceptional significance, the Škocjan Caves were entered on UNESCO’s list of natural and cultural world heritage sites in 1986. International scientific circles have thus acknowledged the importance of the Caves as one of the natural treasures of planet Earth. Škocjan Caves are also the first underground wetland in the list of RAMSAR and included as Karst biosphere reserve in the program MAB - Man and Biosphere. The importance of Škocjanske caves is in their position, they act as a sink and they are part of the Karst aquifer, they are a unique heritage, which includes also rich groundwater communities.
Last modified
2023-02-07 02:02:06 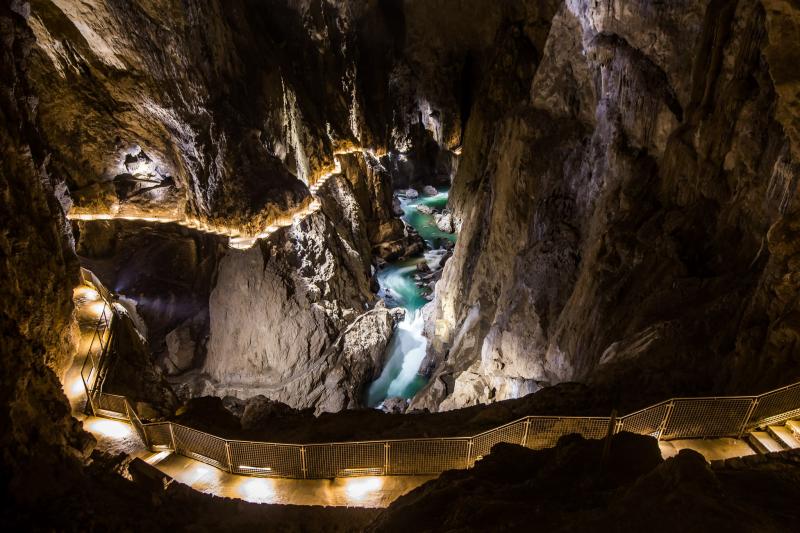 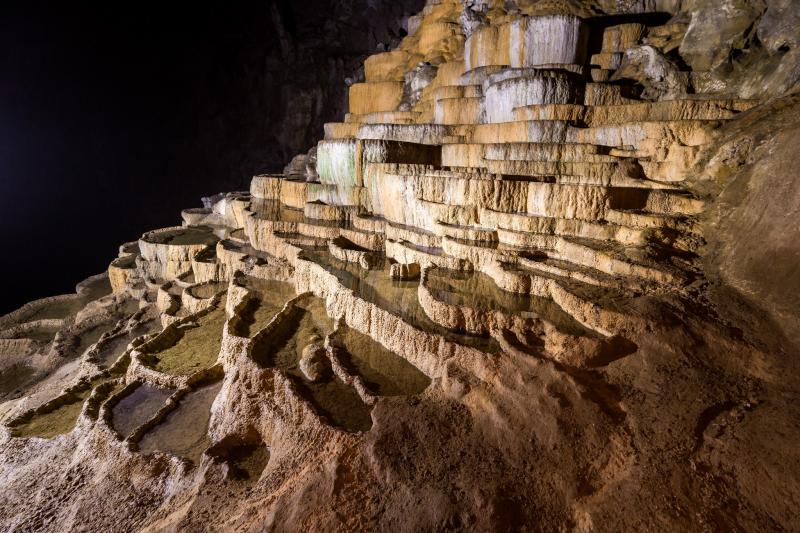 Rimstones in a tourist part of the cave. 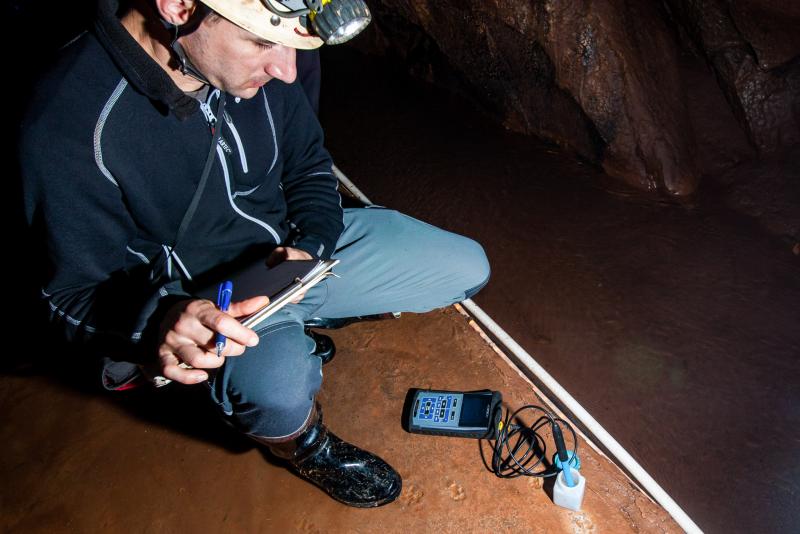 Measurements of the water and air quality. 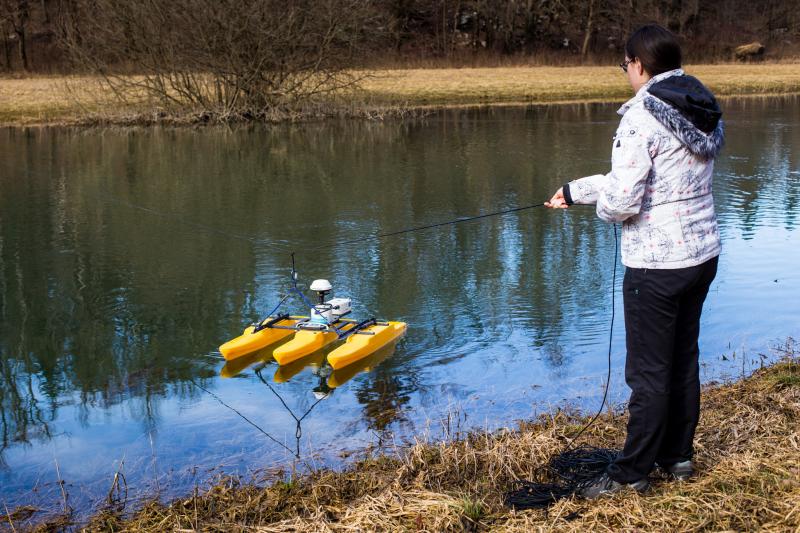 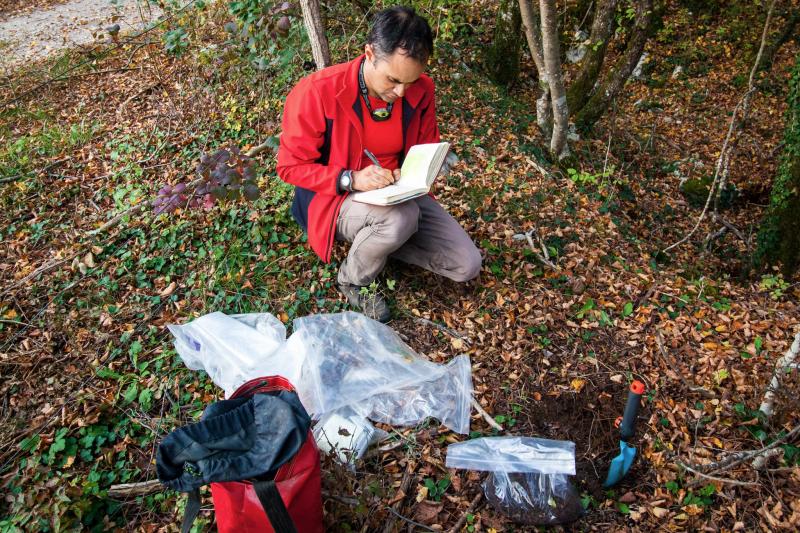 Investigation of the surface-underground interaction through the soil composition analysis. 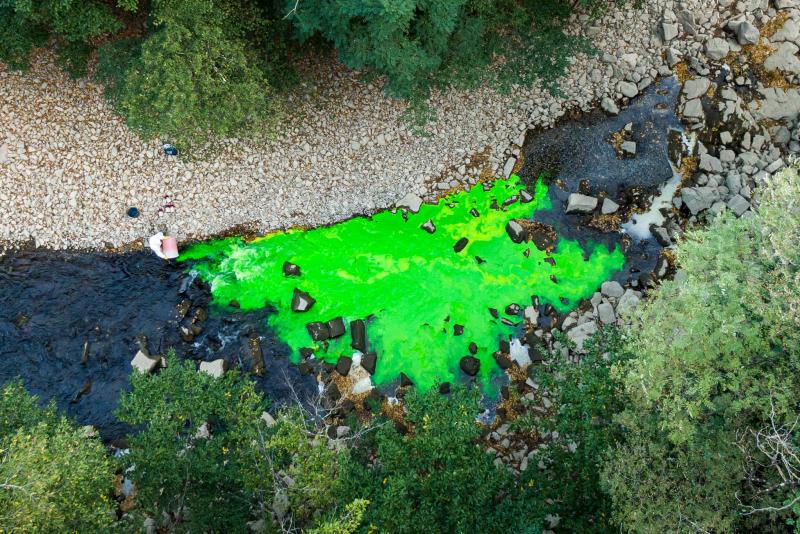 Water tracing for observations of the underground flow (with a support of RI-SI Epos & RI-SI LifeWatch projects). 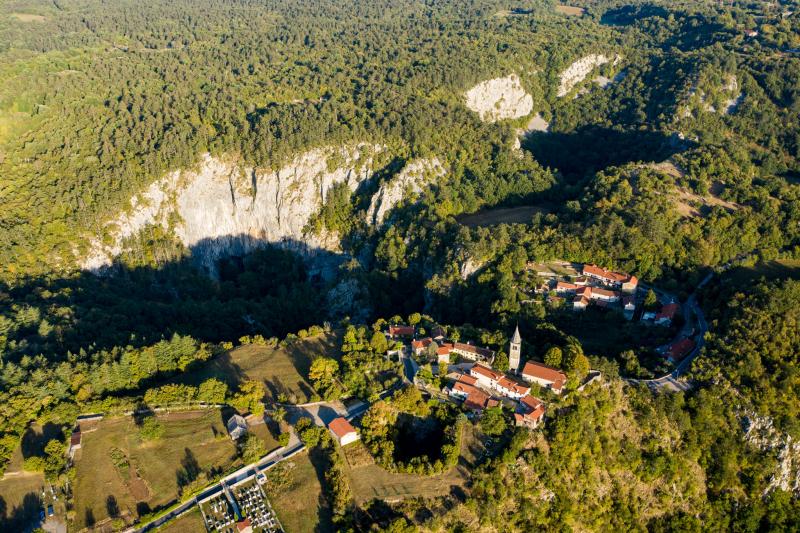 Village Škocjan and collapsed dolines at the entrance of Škocjan Caves (with a support of RI-SI Epos & RI-SI LifeWatch projects).

Centroid/representative coordinates [.shp] [.kml]
Bounding Box [.shp] [.kml]
Boundaries [.shp] [.kml]
Site Details
Ecosystem and Environmental Characteristics
GEO-BON Biome
Fresh water rivers
Terrestrial
Biome
Grasslands
Ecosystem Type
Forest
Biogeographical Region
Mediterranean Bio-geographical Region
EUNIS habitat
Habitat complexes (X)
Habitat complexes (X) » Anchihaline caves (X34)
Air Temperature: Average Annual
12.00°C
Precipitation Annual
1500.00mm
Geology
The Škocjan Caves were formed from Cretaceous and Paleocene limestone near the juncture of impermeable Eocene flysch rock. This contact point, which lies a few kilometres to the south, has played an important part in the development and formation of the caves. The waters of the surface Reka River gather on the flysch rock consisting of quartz sandstone, conglomerates and marl; after passing onto the limestone bedrock, the Reka River sinks into the Škocjan Caves. The development and direction of passages have been decisively influenced by the bedding of rocks and the level of tectonic deformation: by the bedding planes, i.e. separations between rock layers, as well as faults and distinct fault zones.
Vegetation
The Škocjan Caves, a well-known and well-explored outstanding natural phenomenon, have long been recognized as exceptional due to their extremely varied terrain and exceptionally diverse flora and fauna. Collapse dolines and their surroundings offer shelter to rare and endangered bird species and several bat species, and an extraordinary ecosystem that has developed due to particular geomorphologic and microclimatic conditions has been preserved. The deep collapse dolines surprise phytogeographers with their numerous kinds of frigophilous species and a variety of thermophilic, sub-Mediterranean species co-existing nearby. In the area of the regional park, we find thermophilic species characteristic of sub-Mediterranean grassy areas and scrubs. The Park is the habitat of some endemic, rare or endangered species, which have also been entered in the red list of ferns and seed plants of Slovenia: Orobanche mutelii (the only habitat), Lamium wettsteinii (one of the two habitats), Campanula justiniana (´classical´ location or locus classicus), Aconitum anthora, Hyssopus officinalis, Juniperus oxycedrus, Ranunculus pospichalii and Salvia officinalis. The distinctiveness of the flora in Velika dolina is evidenced by species that grow here, relicts from the previous geological periods in the same sites. Glacial relics (relicts of the Ice Age flora), such as alpine auricula (Primula auricula), crusted saxifrage (Saxifraga crustata) and Kernera (Kernera saxatilis), are concentrated on the bottom of the collapse doline, just above the Reka River sinkhole. Some 40 metres higher, on the ceiling of the Schmidl Hall entrance, thermophilic relics (remnants from warmer periods) grow, i.e. maidenhair fern (Adianthum capillus-veneris), wild asparagus (Asparagus acutifolius), prickly juniper (Juniperus oxycedrus), and Tortella flavovirens moss. It is a unique natural phenomenon that such different relics thrive together.
Hydrology
The cave was formed by the disappearing Reka River that gathers most of its waters on the impermeable flysch rock. Its average rate of flow before sinkholes is 8.95 m3/s, reaching up to 387 m3/s during heavy flooding. Following heavy rains, the Reka River floods in the cave, usually reaching levels up to 30 metres; the highest recorded rise in the water level was 132 metres. The Reka River flows from the Škocjan Caves through the Karst underground and emerges to the surface in Italy some thirty-five kilometres away at the springs of the Timava River. Its flow is for the most part unknown and can only be reached in few deep shafts (up to 320 metres deep), but the siphons hinder any further exploration along the mysterious underground channels. It is believed that prior to the Pleistocene (which lasted about two million years) the Reka River was a surface stream flowing from the flysch ground across the Karst towards the sea. Due to karstification, it was gradually disappearing underground and began to carve a gorge in the limestone bedrock, which is evidenced by river terraces. The gradual lowering of the channels through which the Reka River used to flow is also visible in the cave.
Type, Design and Scale
Site Type
Stationary land-based site
Design of Experimentation
mainly experimentation
Scale of Experimentation
beyond catchment scale
Design of Observation
mainly observation
Scale of Observation
beyond catchment
Equipment
Permanent Power Supply
Yes
Equipment
Observation devices » Temperature Controlled Container
Data infrastructure » Data services » Other data services
Data infrastructure » Data storage » Unstructured file
Energy and data transmission infrastructure » Data transmission » Data Transmission Type (within site) » Cable based
Energy and data transmission infrastructure » Energy supply » Permanent Power Supply Location » Central station(s)
Energy and data transmission infrastructure » Energy supply » Permanent Power Produced » Less than 1 kW
Operation
Accessible All Year
No
All parts of Site Accessible
No
Access Type
regular car
Permanent Operation
No
Site Visit Interval
1
Maintenance Interval
30
Data Management
General Data Policy
Co-authorship on publications resulting from use of the dataset
Formal acknowledgement of the dataset providers
The opportunity to collaborate on the project using the dataset
Network related information
LTER Site Classification
Regular
Additional data
There is EURO-CORDEX climate scenario data available for this site: