Basic Information
Site Name
Campos Rupestres da Serra do Cipó
Short name
CRSC
Country
Brazil
Web Address
https://sites.icb.ufmg.br/leeb/peld/
Site Manager
Geraldo Fernandes
Site Description
For over 20 years as a team of Long Term Sites in Serra do Cipó PELD-CRSC has been working to answer crucial questions of evolutionary ecology and provide a basis for understanding the spatio-temporal ecosystem functioning and it is future challenges with changes in climate and land use.
Last modified
2022-09-02 09:09:48 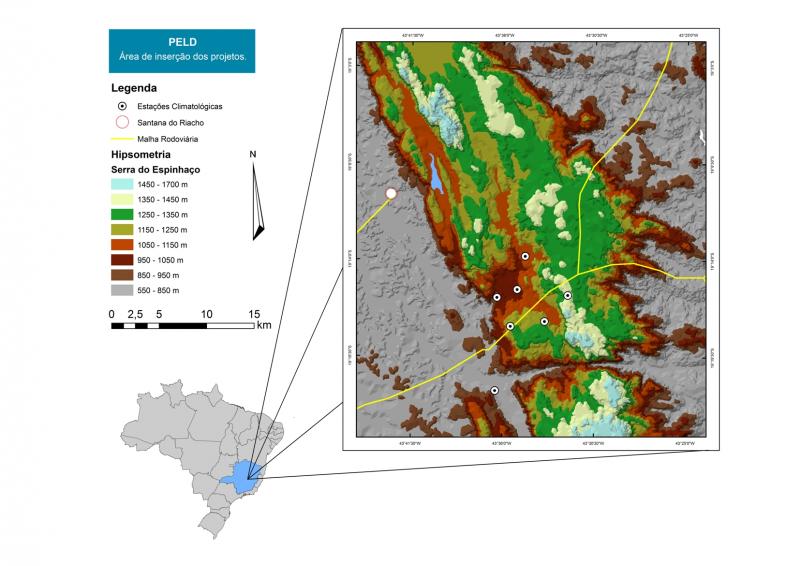 Map of the study site

Centroid/representative coordinates [.shp] [.kml]
Bounding Box [.shp] [.kml]
Boundaries [.shp] [.kml]
Site Details
Ecosystem and Environmental Characteristics
GEO-BON Biome
Terrestrial
Biome
Grasslands
Ecosystem Type
Grasslands
Savanna
Tropical and subtropical grasslands, savannas, and shrublands
Air Temperature: Average Annual
18.00°C
Precipitation Annual
1600.00mm
Landforms
Mountain
Plateau
Valley
Geology
The geological history of the region is quite old, dating back to the Precambrian period (over a billion years ago). Quartzites, the predominant sandy rocks in the Serra, were formed by marine deposits about 1.7 billion years ago. The "riple marks", marks formed by the ripples of the sand caused by the movement of the waves are common. After the removal of the waters and the uplift of the mountains, the Espinhaço Range was formed. The alteration of the rocks gave rise, in the Cretaceous, to the soils currently occupied by the cerrados, rupestrian fields and gallery forests. The area is divided into two geosystems: the Espinhaço mountainous geosystem and the semi-mountainous geosystem of the Middle Cipó river inter-plateau basin.
Vegetation
The vegetation of the region is extremely varied and diverse and the degree of endemism is one of the highest in the world. The region is home to the most extraordinary sample of rocky outcrops in Brazil. At least three major vegetation formations (Cerrado, Mata Atlântica and Caatinga) can be defined due to geographic positioning, the varied morphology of the uneven soil and the climatic variation at different altitudes. In the research area four main types of vegetation are frequent which are: Cerrado, Campo rupestre, Atlantic forest patches (capão de mata) and gallery forests.
Soils
In the Espinhaço geosystem, if not rocky outcrops, the soils are litholic, acid and shallow. They occupy accentuated, mountainous and strongly undulating reliefs with frequent rocky outcrops, normally associated with cambisols. The phytomass is represented by rocky fields subjected to annual or periodic fires. There are stretches of gallery forests along water courses, in valley bottoms and alluvial soils throughout variations in altitude.
In the semi-mountainous geosystem of the inter-plateau basin of the Middle Cipó river, the soils found in this geosystem present an incipient B horizon (allic and dystrophic cambisols). The soils are thicker, due to the decomposition of limestone and alluvial deposits. The soils are well-irrigated and suffer flooding during the wet season and have low natural fertility and susceptibility to erosion. The phytomass comes from savannah and gallery forests.
Hydrology
The Espinhaço Range encompass a watershed between the São Francisco River and the rivers of the Brazilian east coast. Several rivers of regional relevance have their sources in the Serra do Cipó National Park or in the Morro da Pedreira APA. The rugged relief of the region favors the formation of several waterfalls, natural pools and/or rapids of great scenic value. Due to the abundance of these water bodies, tourist visitation is extremely common, exerting strong human pressures on the fragile ecosystem.
Protection Level and Land Use
Protection Level (IUCN category)
Category II – National Park
Category VI – Protected Area with sustainable use of natural resources
Land Use
primary production
tertiary production
tertiary production » community services
tertiary production » cultural entertainment and recreational services
other uses
other uses » areas without any specified planned use
other uses » natural areas not in other economic use
Type, Design and Scale
Site Type
Stationary land-based site
Design of Experimentation
mainly experimentation
Scale of Experimentation
plot scale
Design of Observation
mainly observation
Scale of Observation
plot within catchment
Equipment
Permanent Power Supply
No
Equipment
Observation devices » Phenocam
Data infrastructure » Data storage » Graph or object database
Operation
Accessible All Year
No
All parts of Site Accessible
No
Access Type
regular car
Permanent Operation
Yes
Site Visit Interval
60